In the past the papermill, De Middelste Molen, and its adjacent farm belonged to the same owner. In those days, more “paperfarmers” lived like that in Loenen. They manufactured paper and had some cows on their farm to be on the safe side in case there was no paper production in winter. When the water was frozen it was impossible to make paper.

From 1622 on there have been even 2 “Middelste Molens”. Various times, the mills changed hands, until in 1866, both mills completely burnt down. Only one business was rebuilt; the present mill. The Brothers van Delden rented the mill from the lord of Castle ter Horst. In 1908 G J Bomhof rents the farm and the papermill from this baron. In 1927 Baron Van Voorst tot Voorst sells his complete business to Teunis Wilbrink. The latter is only interested in the farm and the 6 hectares of land. He wants to make the mill into a pigsty and chicken coop. But Bomhof persuades him to rent the mill to him. He has to pay one guilder for every day the mill is in operation. To run the mill, Bomhof has to see to new parts of the mill, such as a new cap and a new waterwheel.

When Teunis Wilbrink passes away in 1932, his widow decides to sell the papermill to Bomhof. The farm is still owned by the Wibrink family. In 1944 Cartonfabriek JW Schut Inc. in Loenen, takes over the mill from Bomhof. At the merger of the Cartonfabriek with papermill Schut and Berends in Loenen, the name “Lona Verpakking” is coined.

Up to 1960 De Middelste Molen manufactured all kinds of paper in an authentic way, but by that time, it had to submit to fast modernisation. Because of lack of buyers, the board was forced to end the production of special paper. In March 1969 the mill came to a complete standstill and its employees went to work at other parts of the Lona business.

At the end of the eighties, the Dutch Paperindustry donated money to save the mill. In 1989 the regional papermills decided to buy this small historical mill at the symbolical sum of Hfl 1,-. From that time on the mill has been a Foundation. The farmhouse was donated to the Foundation by Smurfit Package.

In 1991, after De Middelste Molen had thoroughly been restored thanks to money from the Dutch Paperindustry, several private businesses and individuals, the first sheets of paper rolled from the papermachines and since then, production has steadily grown and improved.

In 2001, apart from the Foundation Papermill De Middelste Molen, the Foundation Museum De Middelste Molen was established. By this, the wish of the government for operational museums is complied with. Furthermore, “the only original Papermill in The Netherlands using hydropower” is exacttly what is needed on the Apeldoorns Kanaal from a touristic point of view. Together with the cultural historical value of the mill and its products, this culminated in the fact that the ambitious plans for complete restoration of De Middelste Molen were considered favourably and were accepted by the national, provincial and local institutions for the Historical Society (Monumentenzorg).

Up to this moment, De Middelste Molen has manufactured all kinds of paper in an authentic way and it has been possible for parties and individuals to watch this process closely. 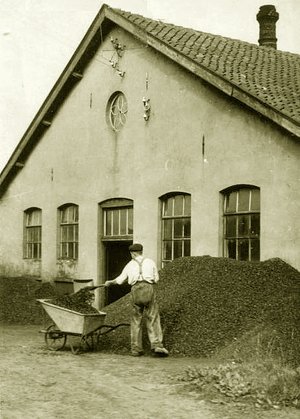 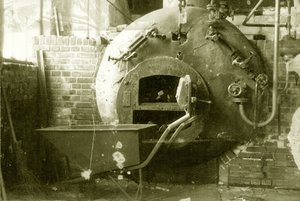 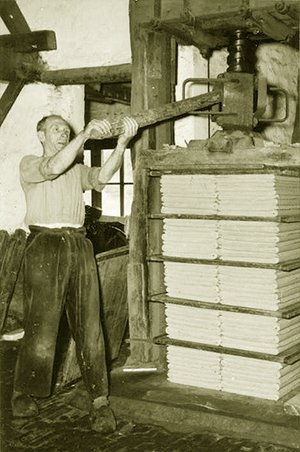